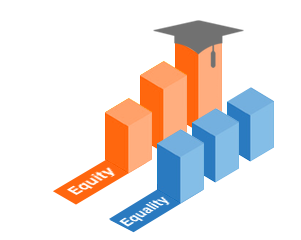 Reconceptualising equality and equity in relation to student success

"Every system is perfectly designed to get the results it gets" (Paul Batalden) gave the delegates - including 25 South Africans attendees - of the Achieving the Dream conference opportunity to pause for reflection. The conference took place during a week of protest at several South African higher education institutions which were to some extent a continuation of the #FeesMustFall campaign. This campaign highlighted the inequalities students face in terms of access to higher education due to lack of funding. To what extent is the South African post-school sector, and more specifically higher education, designed to perfectly reproduce the inequities that we see in our society? It is well accepted that although there have been gains in higher education access there is still a long way to go. In terms of success it appears that our institutions (systems) have not moved significantly enough to produce more equitable results.

Calls for the transformation of higher education are therefore understandable. What is meant by transformation is hotly debated especially from an access and staff representation point of view, but less so from a success perspective. Cloete (2016) points out that transformation calls, which focus on free higher education for everyone, could actually deepen inequality in society instead of making it better. Demands for change in the profile of academics seldom focus on the relationship between lack of greater equity in terms of who and how many graduates progress from undergraduate to post-graduate qualifications. Cloete (2016) cites the work of Van den Berg (2015) who points out the potential of access with success in post-school, especially higher education, which can help people attain a higher probability of employment, as well as a higher earning potential; and by implication a better chance of moving out of poverty.

A focus on equality is understandable in light of our history where students were treated in such an unequal way. The problem with a focus on equality is that it tends to result in institutions' 'overlooking' or negating the specific perspective, assets as well as developmental needs of individual students. As a result of our past and the complexities of contemporary South Africa creating interventions for 'specific groups' could result in the stigmatization and the creation of a new set of problematic stereotypes.

It is here where an equity focus on student success might offer a new opportunity. An equity focus allows us to recognise the individual assets, perspectives as well as developmental needs that individual students enter institutions with. A more individualised focus towards a student's academic success could help create learning experiences that reduce stereotype threat. However, is this at all practically possible in a resource constrained country like our own? It does appear that the use of predictive analytics and existing technology infrastructure provides a possible way forward. A student's data can be used to develop individualised support through software and the intentional introduction of new approaches, especially in academic advising[1]. The data can include biographical data, school performance data, student engagement and academic performance.

The leading example of this work can be found at Georgia State University (GSU). This institution has a very similar profile to many South African universities with a racially diverse student body; 56% of GSU students are dependent on state financial aid. Yet, over a period of 10 years GSU has been able to reverse the 'achievement gap' between White, African American and Latino students and now grant more degrees to the latter two groups than white students. This is the result of the integration of different success efforts ranging from extended preparatory programs prior to first year enrolment for specific students, the creation of first year learning communities, supplemental instruction, innovative pedagogical approaches to gateway subjects i.e. Maths, restructuring of programmes and the professionalization of academic advising (Kurzweil & Wu, 2015). In the case of GSU, 10 years of data was used to identify about 700 potential alerts that are used to track students in specific programme contexts. The GPS advising system would in some instances send a student automatised support messages or in other cases recommend that they make contact with an academic advisor.

In the South African context the integration of data and predictive analytics could complement existing efforts such as tutorials/ supplemental instruction, the reconceptualisation of extended degree programmes to maximally support students' progress, the refocusing of student affairs activities on supporting learning, transforming curricula to recognise and strengthen different perspectives on knowledge. This approach will require institutions to think differently about how they can use all the data at their disposal to better advise their students and to integrate success initiatives thereby building systems that are designed for more equitable student success.

[1] Academic advising is a professionalised field in US higher education. It refers to situations in which an institutional representative gives insight to a student about an academic, social, or personal matter. The nature of the given information can be to inform, suggest, coach, mentor or even teach. Through academic advising students learn to become members of their higher education community, to think critically about their roles and responsibilities as students, and to prepare themselves to be educated citizens of the society and global community (Kuhn 2008; Gordon et al. 2008).

Dobson, D. (2014). The Equity Challenge - Why it Matters and What We Must Do. Presented at the Achieving the Dream 2014, Charlotte, North Carolina.